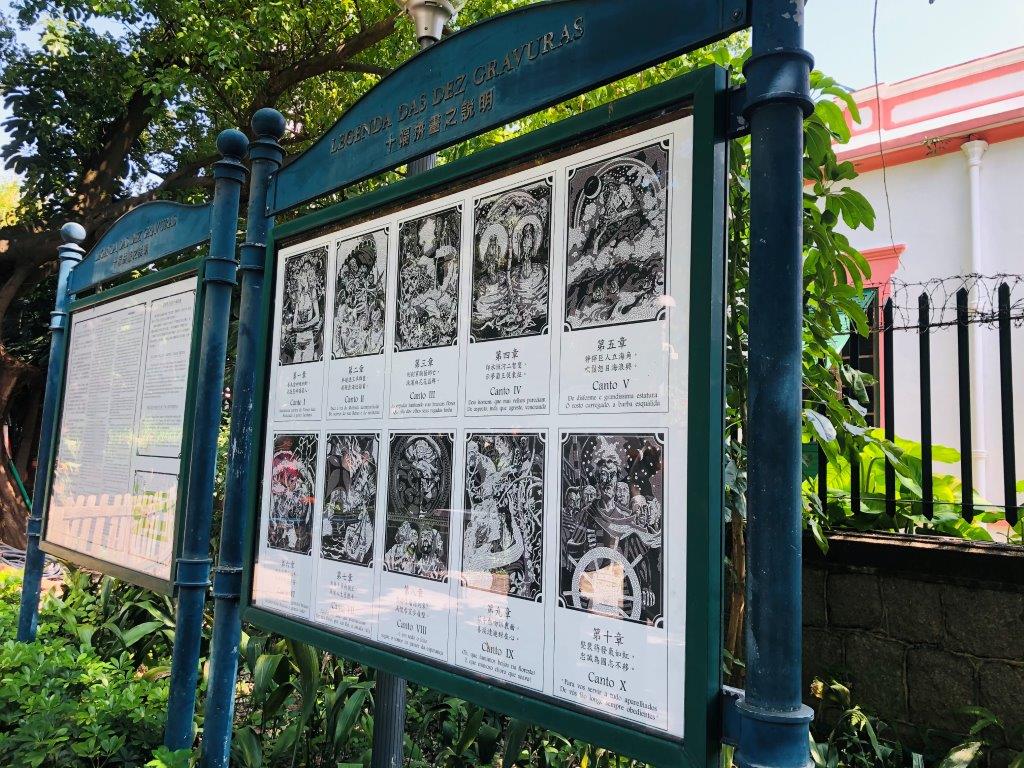 Luis Vaz de Camoes is a great poet of Portugal. The date of his death, 10 Jun; is observed as the “Portugal Day” commemoration of his literary contributions to the Republic of Portugal. He wrote many lyric poems which showed great sensitivity “The Lusiad”. His most well known work, is an epic poem consist of 10 cantos. The poem describes the adventurous voyages of the fleet of Portuguese explorer Vasco da Gama. In 14 98, he found a maritime route between Europe and India; Hence marked the beginning of regular and frequent contact between the east and west.

Camoes had experienced the danger and hardship of the voyages. Besides Morocco and Goa, it is almost certain that the had been to Macao; staying in the Being considered as a trialblazer of European exploration of the east. He had given an accurate description of the oriental cultures and geography of the Eastem world. The ten mosaic pictures are representations of the ten cantos of “The Lasiad”. The depicted contents were created by the Portuguese painter Jorge Estrela; through an adaptation of the paintings by maer artist Lima de Freitas.

All of them are crafted in the artistic style of Portuguese tiled pavement. It was the first time in Macao that this paving technique employed in depiction of complex compositions; (As compared to the usual depiction by simple geometric shapes).

The first mosaic picture depicts how Venus, the goddess of love, protects the Portuguese from danger planned by Bacchus; the Roman god of agriculture, wine and fertility (though Camoes was a Christian in the Renaissance Period; and “The Lusiads” was stemmed from this epoch. The poem has frequent reference to Roman mythological figures)

The second mosaic picture shows the reception of the Portuguese by the Sultan of Melinde; A city on the east coast of Africa.

The third mosaic picture describes the death of Ines de Castro; who was the great love of D Pedro, Son of King Alfonso IV, of Portugal. However, the King disagreed with their relationship and ordered Ines to be killed. After D. Pedro succeed to the throne as the King of Portugal after the death of his father. He sought out the killers of Ines and posthumously crowned her as his queen. He had her skeleton adored with the diadem and royal robe; ordered all the nobility of the kingdom to dress in court attire and swear allegiance to their queen (1360).

The fifth mosaic picture depicts Adamastor mythological giant. At that time, many people believed in a flat earth there was an end to it. Whoever reached its end would fall off the edge of the earth into the abyss. A formidable giant guarded at the edge (southern tip of Africa), known as Cape of Storms. After the Portuguese fleet managed to round the Cape, the king of Portugal renamed it “Cape of Good Hope”.

The sixth mosaic picture, the Portuguese fleet was facing a violent storm. The sea captain ordered his crew to lower the sail to avoid damage.

The seventh mosaic picture depicts one of the many battles against the Arabian sea pirates that dominated the trade.

The eighth mosaic picture depicts the astonishment of the Catholic Portuguese sea crew; when they saw the statue of Shiva in an Indian temple.

The ninth mosaic picture is a depiction of the “Isle of Love”; Where the Portuguese could eventually rest after surviving many perils at sea.

The tenth mosaic picture illustrates the seamen’s determination of venturing ahead with passion and spirit. Despite the absence of maps and knowledge of foreign languages and customs; they survived against all odds with an unwavering faith. They braved the storms, overcame sicknesses, and risked their lives against danger and fear to accomplish their exploratory mission.

The ten mosaic pictures depicting the poem “The Lusiads” are crafted with differently coloured small lime stones. They are paved on the pavement of the Luis de Camoes Park with a sculpture at the centre. These mosaic pictures depictive of “The Lusiads”, adding charm to the Park; which is a popular place visited by residents at leisure and a tourist destination for sightseeing.