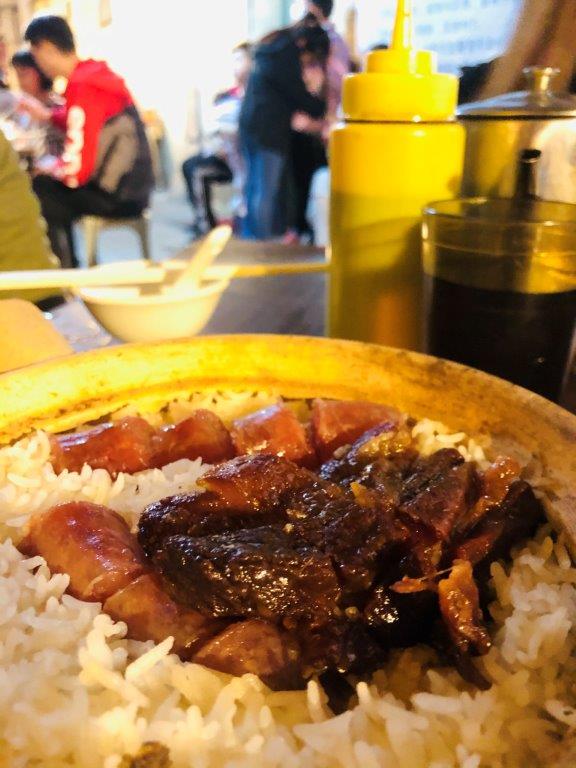 Today’s weather progressively entering into winter seasons, and just then the temperature dropped below six degrees. It was an excellent great time enjoy eating claypot rice. Today have chosen the long non-visiting the street alleyways 6th haystack street, Rua das Estalagens, “Nam Kee” claypot rice . It has a history of more than forty years since its opening. It is a time-honored brand of claypot rice and a fantastic place for dinner night time. Nam Kee open 6 o’clock sharp every night, and even gets busier during winter times.

Nam Kee’s kitchen is located close to the entrance alleyways, not too spacious, tailored made to order on the spot. The seating location is just right next to the neighborhood’s entrance on the ground floor.; The cold wind was freezing and felt shaking outdoor; the waiting time took around 20 to 30 minutes at leasts. After waiting outside the alleyways for the first half rounds felt extremely cold, asking the owner to place an order for a boiled fresh fish head tofu with vegetable soup as an starter, warming up both stomach.

There are so many options for claypot rice, but why the need to sit outside the streets of Nam Kee place? It’s just as simple as that; the kind of human touches, and familiar old traditional tastes.

The formerly traditional cooking method named “Charcoal Claypot Rice”, has slightly amended to first cook the uncooked rice in a “gas stove”, right after using charcoal stove again to absorb the excessive rice moistures. The owner will put the raw rice and other ingredients in casserole till cooked, which is the traditional way cooking claypot rice; this kind of flavor occupied a considerable value. It tastes great after attempted eating the traditional flavors; and the charcoal smell can still be noticeable. Fully understand the reason behind making such changes on the cooking method when busy with many orders can ultimately saved up a bit time during food prep time; which in lead was the main reason too that, can gain back lots of repeating customers businesses.

The shop has a wide selection of rice fish eels, fresh beef, salted fish, chopped fish heads, sora rail (edible frogs), smoked oily duck, etc. My best favorite, the classic doubled lap chong sausage claypot rice; while my friend ordered sliced ​​pork with salted fish claypot rice. Most cutleries and utensils, condiments, are all self-served. Self poured tea, chopsticks and slight sweetened homemade soy sauce all self served, based on own preferred portions. You need to bring them all to the table. If you are brave enough to handle some excessive calories, do try their white colored lard pastes, mix together in claypot rice with rice, which was the most traditional eating style.

If like some “burnt” sticky rice, might consider covering the lid for a fair bit of time before eating after the pot is served on the table; it gradually helped soaking up the excessive water in the claypot; in this way burnt rice will be more crispy. There are different ways of eating; feel free talk to the boss how you would like to eat; you can also “beer for a beer” while eating and having fun.

In addition to their delicious claypot rice, the long history of its streets and the historic buildings of the Chinese and Western Medical Hall nearby are also one of the attraction points. Close to the alleyway entrances, you can see a stone stele with a large surface area covered by a transparent protector, having the incident year carved and recorded in Chinese and Portuguese. In fact, it was established in the twelfth year of Tongzhi, and established in around the year of 1873. From the vanishing stone gateway district along Rua das Estalagens, and Rua dos Mercadores are required to built under mutual agreements.

The original shop rental belongs to one-person shoe shop owner, claimed did not pay the rental timely, but also tempted occupying the entire shop under his ownership ; the three citizenship from neighborhood approach the Macau and Portuguese government to file a lawsuit. After more than ten years of disputes, they finally got the property and took back the ownership. It is extremely hard to find such stone tablets illustrating the lawsuit case in both Chinese and Portuguese languages.

The Chinese and Western Pharmacy Exhibit Hall opposite is one of the private clinic where Dr. Sun Yat-sen practiced medicine in Macau; it officially opened in 1893. It is one of the earliest non-government western medical clinics opened by Chinese in Macau history. According to historical records, the Chinese and Western Medicine Bureau is one of the housing located at No. 80 Rua das Estalagens. The SAR Macau government purchased snd took over this old site ten years ago, and the Macao Cultural Bureau restored and revitalized it. During the period, under the foundation of the auxiliary space, the stone structure discovered through archaeology; which now it is open for exhibition.

Coupled with the attractiveness of this historic Chinese and Western pharmaceutical hall; even if you don’t like eating claypot rice, it’s worth spending some time wondering around closing areas; while admiring its historical relics, you can walk around the streets and eat enjoying local’s favorite claypot rice, while checking-in the spot, is the best thing to do around.